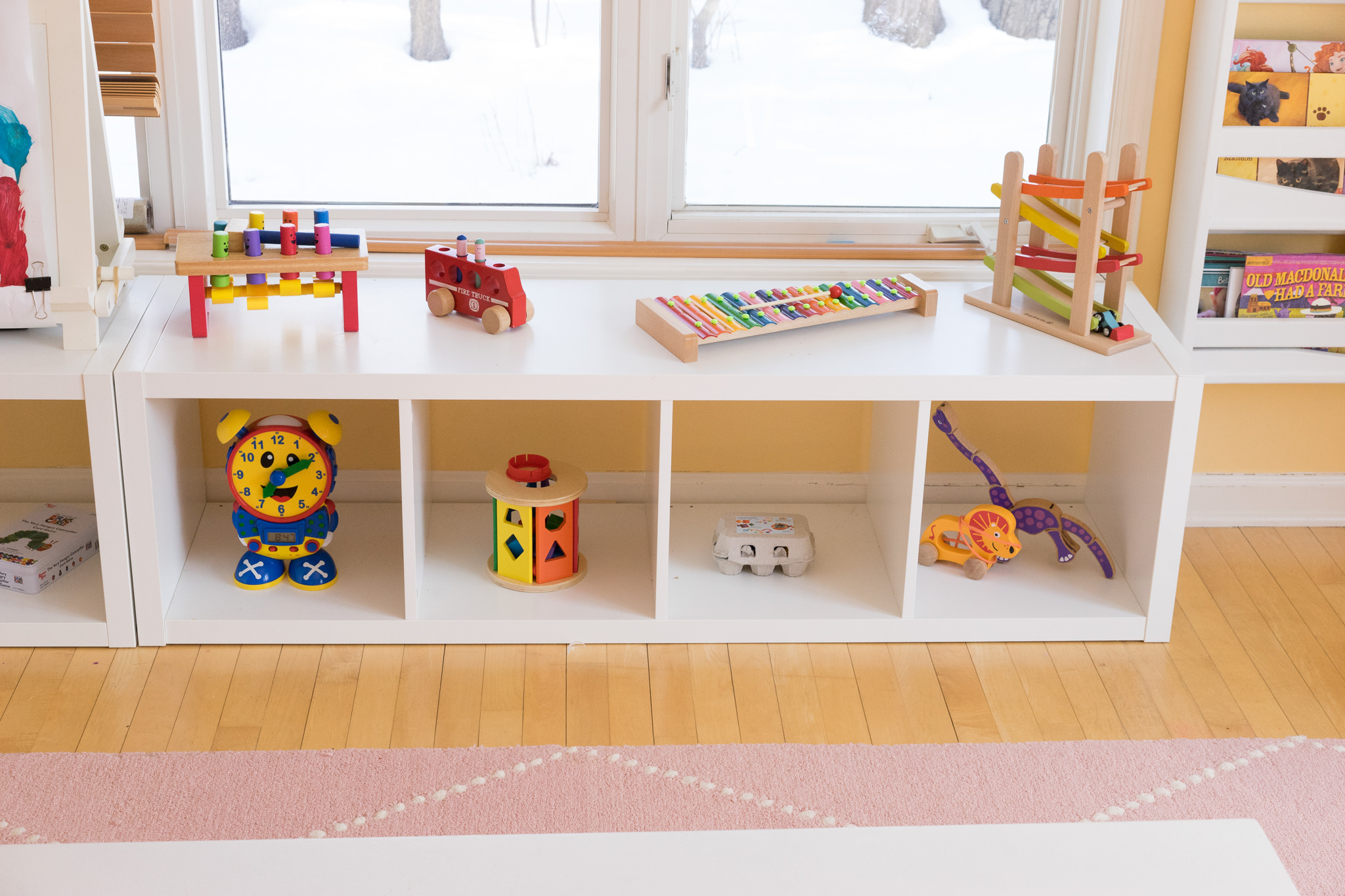 Toy rotation is awesome for everyone involved! Your kids end up enjoying their toys much more, and the amount of mess that is physically possible on any given day is greatly reduced for you. Win-win!

What is Toy Rotation?

Toy rotation is only having a selection of your children’s toys available at any one time. You choose a few things to have out, and pack up the rest out of sight. Every 1-2 weeks, switch them out. Old toys instantly become new and interesting! Works for babies and children of all ages.

If your house is anything like mine, toys are everywhere. The TPK (Toys Per Kid) ratio is insane. I think they spontaneously pop up overnight when I’m asleep. I box them up to donate and they reappear when my back is turned.

It may seem like Kid Utopia, but it’s actually really overwhelming for little ones. When they are standing in a room looking at dozens or even hundreds of different things to play with, their little brains can short circuit (think about the difference between picking a DVD from your shelf, and scrolling through the entirety of the Netflix catalog). They pick the same ol’ toy again, and soon they are “bored”. Or they entertain themselves by dumping out every container they can find.

These awesome playthings are not fulfilling their plaything destiny. They are being wasted, and you are spending all your time tidying them. 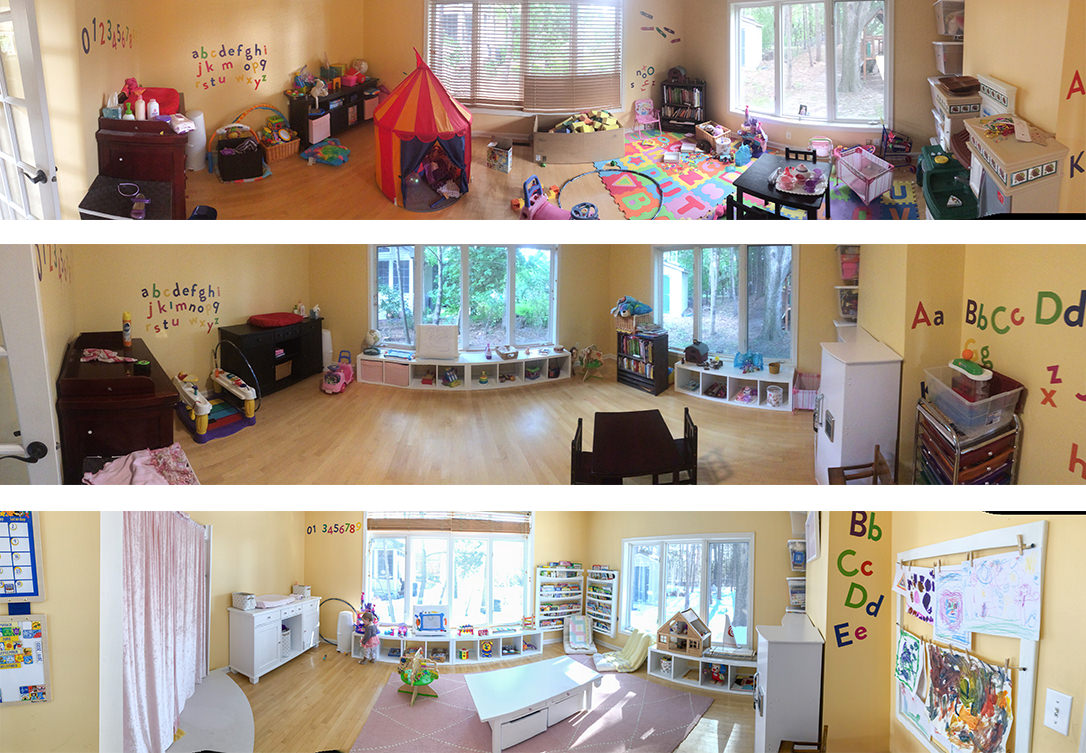 I’ve been revamping my playroom for six months. The top photo was on a GOOD day, after cleaning up that very morning. The bottom photo is after implementing toy rotation, culling a bunch of stuff that wasn’t getting used, and replacing other stuff. Tada! This project funded itself, btw – the wonder of Craigslist and elbow grease.

Help your child and thin the playing field. Give them just a few choices so they can really focus on each one. It also makes cleanup much simpler when everything has a “home”! If I know I can sweep through the playroom in just 5-10 minutes and have everything back in place, it’s much less overwhelming of a thought. 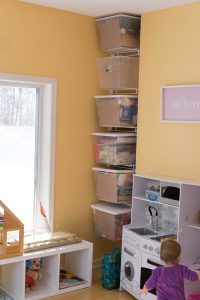 1. First – get rid of your kid 🙂 Seriously, though, don’t try to set this up while your child is around. Wait until after bedtime or when they are at Grandma’s house. I did this once with my 1yo around, and it was a nightmare.

2. Pull out everything they play with and spread it out on the floor.

3. Make piles of toys in the same “genre”. My categories usually end up as “math-y”, ABCs, building toys, dolls, stuffed animals, dress-up, dollhouse, puzzles, games, kitchen, musical, art, and miscellaneous (hello, free paper fan from the bank that is curiously popular when one’s sister has it).

4. Decide how many rotations you are going to have. I have room for six bins on my shelf, so I have six sets of toys. But even just having 2 is fine! Lay out a bin for each group.

5. Take a single toy from each group and place one in each bin until you run out. They won’t split up evenly, but you can balance it out as you go with other categories.

5b. If there are special toys that your child specifically requests, you might have a separate bin for those, and they may not be switched out as often (or at all). I was always having to dig up the blocks, so I finally just set them aside in a closet instead of assigning them to a group.

6. Pick one bin for now and store the rest out of sight. If your space allows it, I recommend shelves where each current toy can have its own space.

I  made these newbie mistakes so you don’t have to!

1. Don’t use transparent bins. The only toys your child will want to play with will be in those bins. Solid colors all the way! If you do accidentally get clear bins, find a way to cover them up. We use cardboard scraps right now – fancy, I know.

2. Make sure each group has a bin, meaning you will always have one empty bin. Makes switching toys out significantly easier.

3. Pick a time when your children are not around when you switch out the toys. Otherwise, they will sob in despair as you put away their “favorite” toy that they haven’t glanced at in 2 weeks. 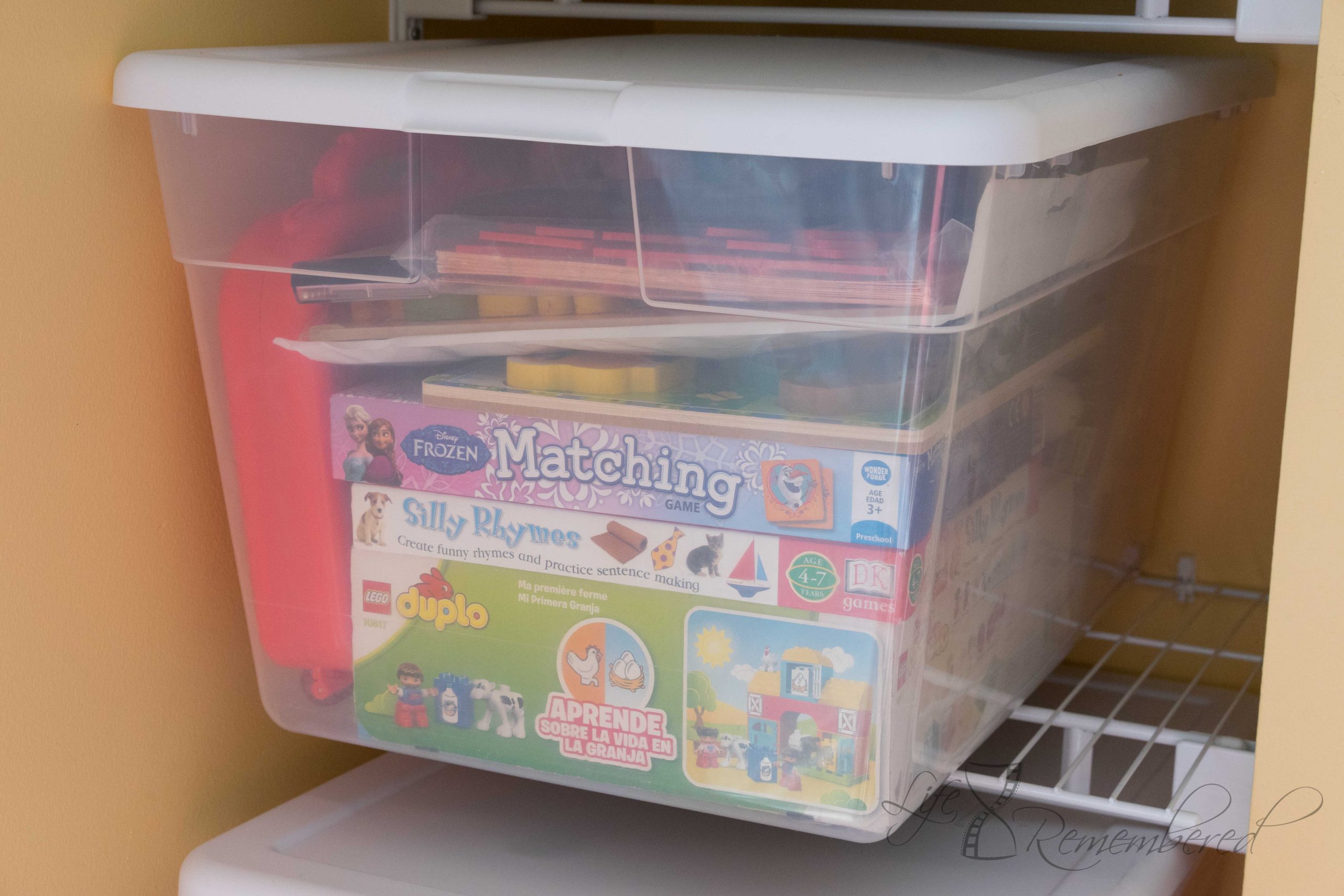 I lost one of my cardboard scraps. Now the only thing my daughter needs in her life to be happy is this Frozen Matching Game.

You can do this!

This process does take a little work – but I find that not doing it takes more work. My children are more engaged and play more independently, leaving me time to Get Stuff Done. I’m not picking up every puzzle piece we own, every day (ha, as though I clean up every day! You get the idea, though).

Incidentally, the bin system helps keep me on track in terms of culling toys. There is literally no room for new stuff without getting rid of old stuff! It also helps me really think about which toys are getting played with, and which ones are ignored. If I’m packing up something and realize I haven’t seen either girl play with it since I unpacked it – out it goes.

I’ve spent the last 6 months reworking our playroom – setting up the rotation while also shifting to a Montessori approach and trying to cut back on electronic toys. I sold some stuff, bought some Ikea shelves, painted some Craigslist finds, and “commissioned” some bookshelves from my husband. My playroom is a place of peace now. I actually love being in there!

Plus, it’s a fantastic place to occupy older siblings while I am photographing their baby siblings in my home studio. Say, would you like some amazing photos of your children? Perhaps a photo in which ALL kids are looking at the camera and smiling, at the same time? It is possible, I assure you. Come on down. 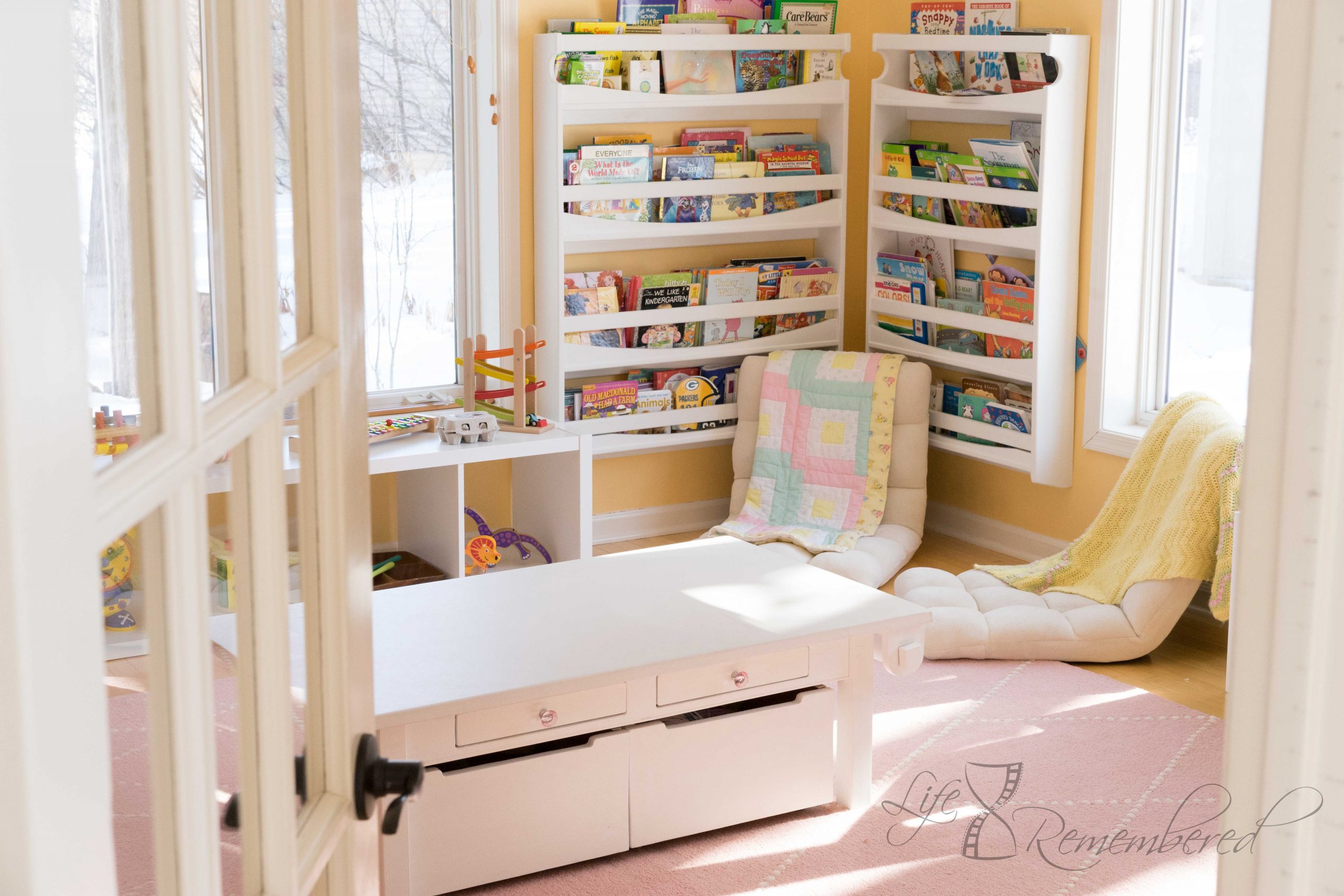