‘Voilà, my scar!’ Hanna as Madeline 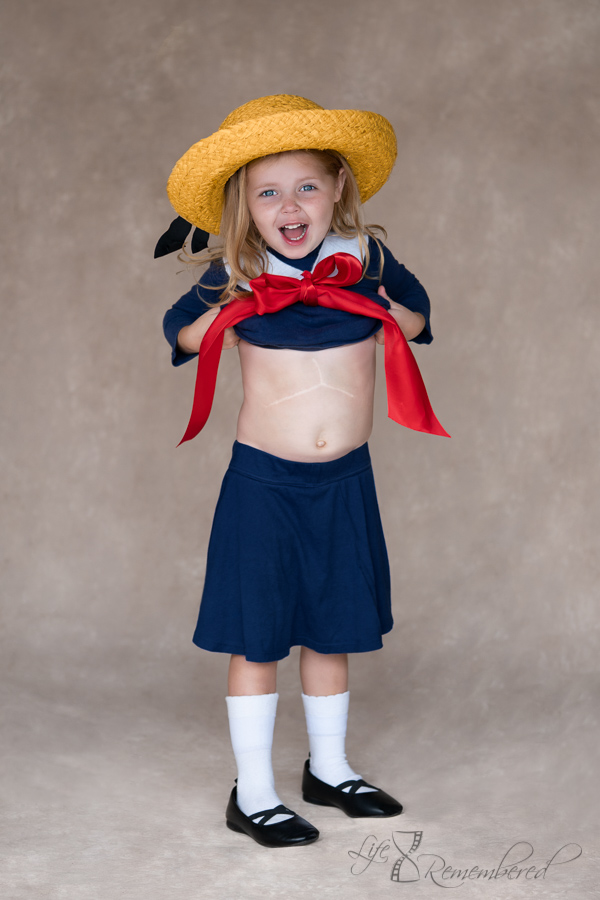 Here is the fifth entry in my Storytelling Portrait Series this year! I will be highlighting children and teenagers who live with significant medical conditions, and telling their stories.

Hanna is a survivor of Biliary Atresia, a rare disease of the liver and bile ducts. Her problems appeared the day after she was born when she repeatedly failed jaundice exams. Despite feeding tubes and countless interventions, Hanna failed to thrive until her liver transplant at 10 months old.  Here is her mother telling her story:

“We spent most of her first months in and out of the hospital. She was very yellow, due to her failing liver, and a swollen belly of water retention.  Still through all of this discomfort, Hanna remained so smiley and happy.  Her older twin brothers really made her laugh and we have a sweet video of when she was 4 months old, belly laughing at her brothers when they were dancing silly. With her happy and tough spirit, she propelled us forward. The disease she had, Biliary atresia, requires a transplant for survival. The day we received the call that a “perfect liver” was available for her, we were elated that she would be given a second chance at life. Simultaneously, the full gravity of the situation fell upon our shoulders and hearts. We knew that for this gift to be available, a family had to not only say goodbye to their child, but also had to decide to give their child’s organs away during the most tragic of circumstances. Due to their selfless decision, they allowed our child to move on to have a full life. In honor of our Angel donor, we complete charity walks, educate others and donate to liver disease organizations. We will continue to live the best life in honor of Hanna’s angel.”

Hanna’s mother already had the perfect setup in mind when she contacted me – she wanted to cast Hanna as Madeline, the titular character of the 1939 children’s book:

When the character ends up with an emergency appendectomy, she returns to her boarding school and proudly shows off to the envious other little girls, revealing, “Voilà! My scar!” The phrase has become something of an anthem for young children who undergo surgery, and I was proud to illustrate it here.

Because of scheduling constraints, we actually had very little time to pull this shoot together. Hanna’s mother was able to put together a costume and hat by borrowing the collar from a relative, and I added shoes when they arrived.

This portrait is actually a great example of the magic of Photoshop! I was able to color-change the blue top and skirt so that they matched, and I shifted the straw hat to be more yellow. I shrank down the red bow, which had become a little distracting. I even added the black ribbons to the back of the hat, taking them from a different shot where they had been more visible.

Hair and make-up were not needed for this beautiful girl! I fell in love with her adorable freckles. And she was so energetic, I doubt any hairstyle would have survived her joyful exuberance.

I especially enjoyed her attempts to make me laugh, since that is usually my role during child shoots. With twin older brothers teaching her all sorts of thrilling things, Hanna definitely had me bursting into laughter several times!

I’m so glad we were able to make this shoot happen, despite challenges. I have a complex relationship with my own scars from my heart surgeries, and I love highlighting the beauty and pride they can bring to a person.

Welcome! I am a luxury baby & family photographer in the western suburbs of Minneapolis, Minnesota. “Luxury” means face-to-face consultations, a beautiful studio, museum-quality products, and in-person ordering sessions where I hold your hand every step of the way. Reach out to learn more about this experience.