Bellatrix in the Family Photo 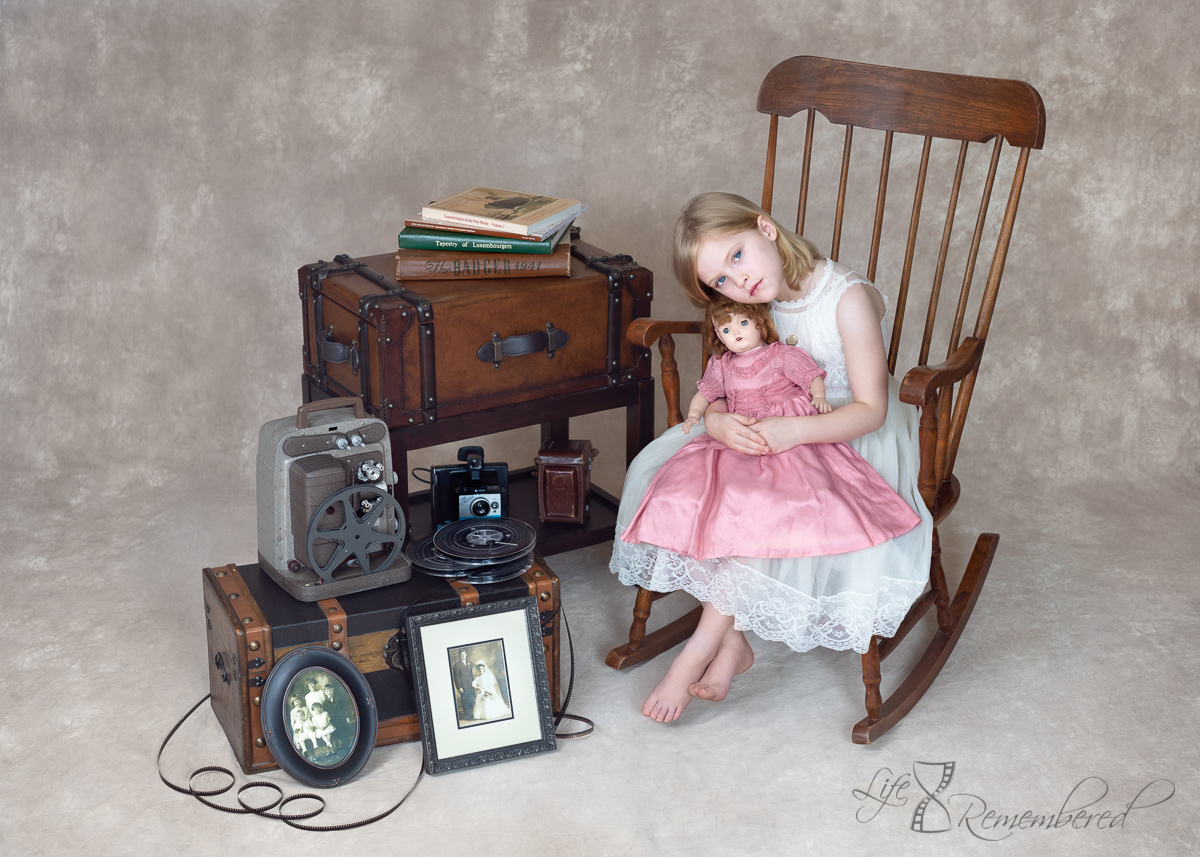 Here is the ninth and final entry in my Storytelling Portrait Series this year!

This portrait is especially personal to me. When I set out to create “storytelling” images this summer, I also wanted to tell my own story. Photography is obviously very important to me, but so is genealogy. Collecting, preserving and sharing my family history is a huge personal passion of mine. I have uncovered thousands of ancestors in my family tree, going back hundreds of years. It’s surprisingly thrilling work!

My ancestry is almost 100% Luxembourgish, a fact which has always brought me pride. Almost everyone emigrated from Luxembourg to the United States around the 1850s. This month, I finally received documents confirming my dual citizenship in Luxembourg – a process that has been almost two and a half years in the making! It’s a gift I can share with my daughters as well. I can’t wait to take them there someday to see our heritage.

There were SO many items I wanted to include in this photo, and I knew it would be overwhelming. I had to be incredibly selective.

The rocking chair was owned by my husband’s grandmother, and the doll was my mother-in-law’s when she was a child. My daughter is wearing a locket that my mother’s mother was gifted by her older sister in the 1940s.

The oval framed portrait is of my mother’s father and his siblings, and the wedding photo is my father’s great-grandparents. Another version of this portrait included a real original photograph of my great-grandfather as a child, but it was too much for the image.

The projector was owned by my father’s parents, and used to display home movies. Those film reels are actual footage of my dad and his siblings growing up! Don’t worry, everything has been converted to digital for safekeeping.

The cameras on the shelf were owned by my dad’s father, and used when he was in the military. I have many of the original photos he took back then!

Finally, the books represent the Luxembourgish history I have been exploring. “Luxembourgers in the New World” is an English translation of a longrunning newspaper run by Nicolas Gunner, a Luxembourger in Iowa. “John William Weiland and Catherine Roob Descendents”, by Michele Weiland, is a book I found after meeting Michele by chance at the Luxembourg American Cultural Society Museum. My favorite, “Tapestry of Luxembourgers” by Beatrice Wester Krier, details the history of Belgium, the specific small town in Wisconsin where I grew up.

The final volume is a 1910 yearbook for the University of Wisconsin: Madison, representing the Wisconsin roots that play such a role in my family. I found it on a walk through Madison one day, sitting with dozens of others in a box on the curb for trash pickup. It was heartbreaking to see such history being tossed aside, plus it was starting to rain, so I carried as many as I could as I ran home. By the time I returned, they were gone. I hope another history buff saved them and not a garbage truck!

The trunk was a yard sale find, a prop for my daughter’s Harry Potter newborn photos. Not everything has years of meaning behind it … yet.

I plan to print this portrait to hang along with a family tree, for me to admire as I continue the work of uncovering and telling our family’s story.

Thank you all for your incredible support during this Storytelling Portrait Series over the last few months!

Welcome! I am a luxury baby & family photographer in the western suburbs of Minneapolis, Minnesota. “Luxury” means face-to-face consultations, a beautiful studio, museum-quality products, and in-person ordering sessions where I hold your hand every step of the way. Reach out to learn more about this experience.